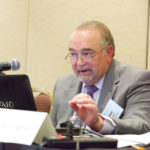 “The loss to the association has been felt deeply both professionally and personally,” said Cathe Cole-Sherburn, UTA President.  “The Board of Directors and the Association relied on his expertise, his defense of, and assertiveness, on behalf of our industry.  He was respected, beloved, brilliant and funny.  He will remain a legend in our industry and lives,” she said.

Phil supported, advanced, and fought for both UTA as an Association and its members in numerous ways, including:

-Serving on conference panels every year and providing stellar case law and legislative updates to the membership. “He was a dynamic speaker,” said Cole-Sherburn.

-Leading essential and topical classes for the membership on an array of topics over the years.

-Participating, drafting and testifying before the Legislature regarding amendments to California statutes involving real estate finance. “Phil was highly successful in drafting legislation and convincing legislators and their staffs that trustees had a unique position in California law and deserved protection from the Legislature.  Phil’s legislative accomplishments on behalf of UTA shaped and will continue to shape the industry for decades,” said Cole-Sherburn.

-Lobbying in Sacramento and speaking at city council meetings on a variety of topics, including municipal ordinances and the appropriate use of public space in front of court buildings to conduct sales.

-Supervising and participating in many amicus briefs.

-Writing the Association’s bylaws and ensuring that UTA complied with a myriad of laws as a non-profit entity.

-Consistently supporting the association financially through contributions as a member and steep discounts as Corporate Counsel.

“UTA honored Phil in 2015 for a lifetime of dedication to UTA, however, there is no way to convey the intellect, the fun, and the humor that Phil brought to the Association.  In so many ways, he was integral in the creation and the building of this Association,” said Cole-Sherburn.

As an Association, I have to add, that we are proud that it was through UTA, that Phil met his wife, Linda Kidder – our 2007 UTA Dorothy Schick Veteran Member of the Year.  Is it any surprise that they realized they had something deeper while they were teaching a UTA class together in 2005?” she asked.

To honor Phil, the UTA board has voted to have a board seat in Phil’s memory that will stand in perpetuity.  As such, Phil’s name and bio will always be listed on our website and anywhere the Association list the UTA Board of Directors.

UTA also created a new award – the ‘Phil Adleson Education Advocacy Award’ – which will honor a member annually who has contributed in the areas of education and advocacy on behalf of UTA.