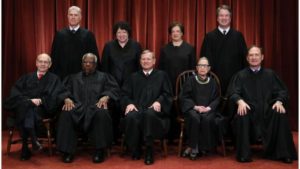 The U.S. Supreme Court has ruled in favor of the UTA position in the Obduskey case, by a unanimous vote of 9-0.  In essence, trustees and law firms providing non-judicial foreclosures are not debt collectors under the Fair Debt Collection Practices Act (FDCPA).

The Justices ruled 9-0 in the case, with Justice Stephen Breyer writing the opinion and Justice Sonia Sotomayor also wrote a concurring opinion. Read the full text of the opinion

UTA had filed an amicus brief along with industry organizations CMBA, CMA and ATA, in the case of Obduskey v. McCarthy Holthus.  The brief summarizes why nonjudicial foreclosure should not qualify as debt collection under the FDCPA.

According to the U.S. Supreme Court summary of the case: “This case presents a clear and entrenched conflict regarding whether the FDCPA applies in the foreclosure context. In the decision … , the Tenth Circuit, siding with the Ninth Circuit, held that non-judicial foreclosures are not covered by the FDCPA; in doing so, the panel acknowledged the issue has “divided the circuits,” and it expressly rejected the “contrary position” of multiple courts of appeals and state high courts. This holding was the sole basis of the decision … , and it arises on the precise fact-pattern that has generated extensive “confusion” and hundreds of conflicting decisions. This case is the perfect vehicle for resolving the widespread disagreement over this important issue.”