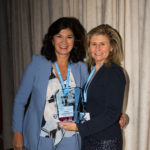 Michelle Mierzwa is the worthy recipient of the inaugural (2017) ‘Phil Adleson Award’.  The award will be presented annually to a member who both educates and advocates on behalf of UTA and its membership.

In presenting the award, UTA President Cathe Cole-Sherburn said that Mierzwa has “presented UTA educational sessions on an incredible range of topics, including FHFA updates, CFPB servicing rules, the National Servicing Settlement Agreement, Dodd-Frank, The Homeowners Bill of Rights, and Municipal Distressed Property Ordinances – and that is just to name a few.  And her presentations always receive extraordinarily high marks for the preparation, content and information.

She has analyzed and drafted legislation on behalf of the Association and to protect trustees, before the California, Nevada and Washington legislatures – again – on numerous topics, including municipal distressed property ordinances and notices to bidders; mediation programs, HBOR; and virtually every issue that UTA has been involved with in her six years on the Board.”  Mierzwa has been an active member of the Legislative Committee since 2009.

With respect to her involvement on the Board, Cole-Sherburn said of Mierzwa:  “She has served as Chair of the Legal Resources – Case Law – Committee where she has reviewed and supported many of UTA’s amicus briefs, and on the Board of Directors, she has served as the Association’s Secretary and CFO and has been a driving force for UTA as an active Director.”

“I am humbled and honored to receive this award,” said Mierzwa.  “Phil was such an amazing attorney, advocate and friend, who is deeply missed on a personal level as well as by the UTA.  I’m looking forward to continuing Phil’s legacy of education and support of the lending, servicing and default industry for years to come.”