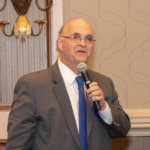 Martin McGuinn is the worthy recipient of the 2018 Phil Adleson Education & Advocacy Award.  The award is presented annually to a member who both educates and advocates on behalf of UTA and its membership.

In presenting the award, UTA President Cathe Cole-Sherburn said that McGuinn has “reviewed, supported and written many of UTA’s amicus briefs and presented to members annually on California Case law which provides relevant, practical and absolutely critical information to trustees.”

McGuinn has served many terms for decades on the Board of Directors and has been a driving force for UTA as an active Director and now Corporate Counsel.  He has actively lobbed annually in Sacramento on behalf of UTA.  “he has been a model of education and advocacy and I am thrilled to present the Phil Adleson Education and Advocacy award to Marty McGuinn.”

“I am honored to accept this award which honors my dear friend, Phil Adleson,” said McGuinn.  “I hope to follow in his footsteps in education and advocacy.”