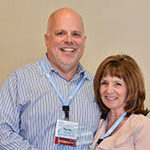 Marsha Townsend received the Dorothy Schick Veteran Member of the Year Award for her work as a Board member for many years; her great work as the Association’s Chief Financial Officer for two years; her service on the Nomination Committee for several years.  “She also often provides UTA with regulatory information and updates,” said UTA President Randy Newman in presenting the award.

Andrew Boylan received the Suzanne Kelly New Member of the Year Award for “being actively involved in lobbying in both Sacramento and Olympia, Washington; for drafting legislative language on several issues affecting trustees in California; and for speaking at a UTA dinner event,” said Newman.

The awards honor members for their service and contributions to the Association and the industry and are given to a member who has elevated the Association in its mission to foster and promote the quality of the default services industry through their extraordinary efforts and dedication. Award winners are nominated by UTA’s Committee Chairs and Board Members with a final determination of the winner made by the Board of Directors.