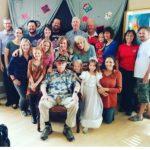 Long-time member James M. Allen Sr. passed in November.  James was the President and General Counsel with Action Foreclosure Services, based in San Diego, which he founded in 1990.  James M. Allen Jr. succeeded his father as President of the company in 2018.

James Allen Sr. was an active member in UTA’s previous iterations – both CTA (California Trustees Association) and ITSO (Institute of Trustee’s Sales Officers).  He began his career with First American Title, eventually becoming Regional Counsel, supervising the Trustee Sale Department.  Later, in private practice he handled foreclosures for clients and was involved in some syndications which took back notes secured by Deeds of Trust.  He spent three years as a lawyer at Fidelity in the late ‘80’s before starting Action Foreclosure Services.

James Sr. was a former private pilot and triathlete as well as a long time amateur radio operator.  He played tuba in the Coronado Community Band, and in 2012, told UTA Quarterly that he was a “grandfather to the world’s cutest granddaughters.”  He is survived by his wife, Martine Cardin-Allen, two sons, two granddaughters, a brother, a sister and many nieces and nephews.