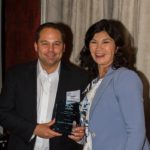 Joyce Copeland-Clark received the Dorothy Schick Veteran Member of the Year Award for service on the Board for many years in many leadership roles including President for two years; and her participation on several conference panels and several dinner panels; and her active involvement in working groups on the California Homeowner Bill of Rights implementation, Nevada Affidavits and issues involving the Nevada Homeowners Bill of Rights; and property registration ordinances and for “always providing and sharing informative information for members, “said UTA President Cathe Cole-Sherburn in presenting the award. 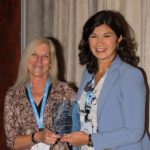 Robert Forster II received the Suzanne Kelly New Member of the Year Award for “serving on our 2016 conference Case Law panel and provided detailed analysis of Texas case law and for speaking at a session at our conference this year on surplus funds,” said Cole-Sherburn.

The awards honor members for their service and contributions to the Association and the industry and are given to a member who has elevated the Association in its mission to foster and promote the quality of the default services industry through their extraordinary efforts and dedication. Award winners are nominated by UTA’s Committee Chairs and Board Members with a final determination of the winner made by the Board of Directors.