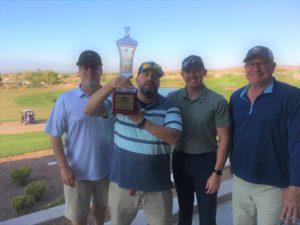 The Second ‘The Adleson Cup’ was pure pleasure this year as the golfers enjoyed perfect weather on the beautiful Concord Course at The Revere Golf Club in Henderson, NV. “Another great time was had by all who participated as we enjoyed bright blue skies, lush green grass, the camaraderie golfers share and the opportunity to once again honor Phil Adleson,” said Robert Cullen of Redwood Trust Deed, the Tournament Coordinator.

The winners of the Scramble format Golf Tournament for the second year in a row, were the team of Steve Scott, Mike Reed, Manny Ojeda and Bryan Beckler.  Their names will be inscribed on the actual Adleson Cup, as was last year’s.

Awards were presented at the post-golf reception sponsored by PLM Family of Companies.