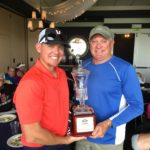 The 24th Annual UTA Golf Tournament – and the first of what will heretofore be named ‘The Adleson Cup’ – was pure pleasure this year as 26 duffers enjoyed the beautiful Concord Course at The Revere Golf Club in Henderson, NV.  “It was great to establish a new tradition honoring Phil Adleson, who loved this tournament,” said Robert Cullen of Redwood Trust Deed, the Tournament Coordinator.

The winners of the Scramble format Golf Tournament were the team of Steve Scott, Mike Reed, and Manny Ojeda.  Their names will be inscribed on the actual Adleson Cup, as will all future winners.

Awards were presented at the post-golf reception.