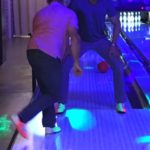 Bowling Tournament was a blast!

UTA held a bowling tournament in the private Kingpin Club at the National Bowling Center in Reno, Nevada on November 5th.  While the second game included fun bowling adventures – such as spinning before bowling; bowling between a teammates legs; and bowling while sitting down – the first game was serious.

Thank you to sponsors Auction.com; FSI; iMailTracking and ProVest.